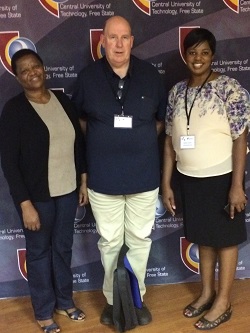 The 25th annual conference of the Southern African Association for Research in Mathematics, Science and Technology Education (SAARMSTE) was hosted by Central University of Technology from the 17th – 20th of January 2017 in Bloemfontein.

AIMSSEC was represented by Ms Lindiwe Tshuma who presented a research paper on relationships between language competency and mathematics instruction. In line with SAARMSTE’s focus on advancing research in mathematics, science and technology education in Southern Africa, the conference provided Ms Tshuma with opportunities to discuss language issues in primary science and mathematics with experienced researchers in the field. From the 20th – 21st of January, Ms Tshuma attended the SAARMSTE Post Conference Writing Clinic for emerging researchers, conducted by Prof Fred Lubben (the editor of the African Journal of Science, Mathematics and Technology Education).

While in Bloemfontein, Ms Tshuma also met with University of the Free State (UFS) South Campus management team to learn more about the recently introduced Advanced Certificate in Teaching (ACT) online course which was pioneered by the UFS in 2016. The introductory meeting also served as a platform of establishing a link between AIMSSEC and UFS.